President Donald Trump for the first time on his Twitter feed used the phrase “Chinese Virus,” stepping up friction between the world’s two biggest economies as each tries to deflect blame for a deadly pandemic.

Trump, who has previously called the disease a “foreign virus,” tweeted on Tuesday: “The United States will be powerfully supporting those industries, like Airlines and others, that are particularly affected by the Chinese Virus.” Trump has previously retweeted a supporter who called it a “China virus.”

With the coronavirus spreading from China into the U.S. and around the world, both nations are trading tit-for-tat claims about its origins. The tense back-and-forth over what to call the virus is the latest chapter in a broader clash between the world’s two largest economies that ranges from trade and military competition to network equipment made by Huawei Technologies Co.

Chinese Ministry of Foreign Affairs spokesman Geng Shuang said at a press briefing on Tuesday that Trump’s tweet smears Beijing, state broadcaster CCTV reported. “We are very angry and strongly oppose it,” he said, “The U.S should redress its mistake and stop baseless attacks against China.”

Hours before the Trump’s tweet, Secretary of State Michael Pompeo told top Chinese diplomat Yang Jiechi the Trump administration strongly objects to China’s “efforts to shift blame” for the coronavirus to the U.S., according to a State Department readout.

President Donald Trump’s use of the racist term “Chinese virus” when describing the global coronavirus outbreak is apparently counter to how his aides are presenting information to him to read to the public according to a photo taken Thursday by Washington Post photographer Jabin Botsford.

“When someone you know dies of this thing, you can find solace in the fact that when the president was supposed to be leading the nation through this pandemic, he was busy making hand edits to speeches so that the Chinese would be adequately scapegoated,” tweeted political journalist Brian Tyler Cohen.

As Common Dreams reported Wednesday, Trump’s insistence on using the term “Chinese virus” is part of an American history of using racist tropes about disease. The president’s own handwriting scrawling the term across his notes at a press conference drew outrage on social media as observers like Daily Beast reporter Sam Stein noted the “obvious attempts to start a debate over political correctness” rather than Trump’s mishandling of the pandemic, which threatens the lives of thousands if not millions of Americans.

“This is the extent of Trump’s contribution to the debate,” said Froomkin. “He needs to be routed around, not heeded.” At his Thursday press briefing on the coronavirus, Trump in response to a question on holding China accountable for the outbreak suggested there would be “repercussions” for Beijing. “We’re working on that right now,” said Trump.

Disease and prejudice have long gone hand in hand. On  24 Mar. 2020, “Chinese” was crossed out by Trump’s hand and an extra paragraph about protecting Asian Americans was taped in. 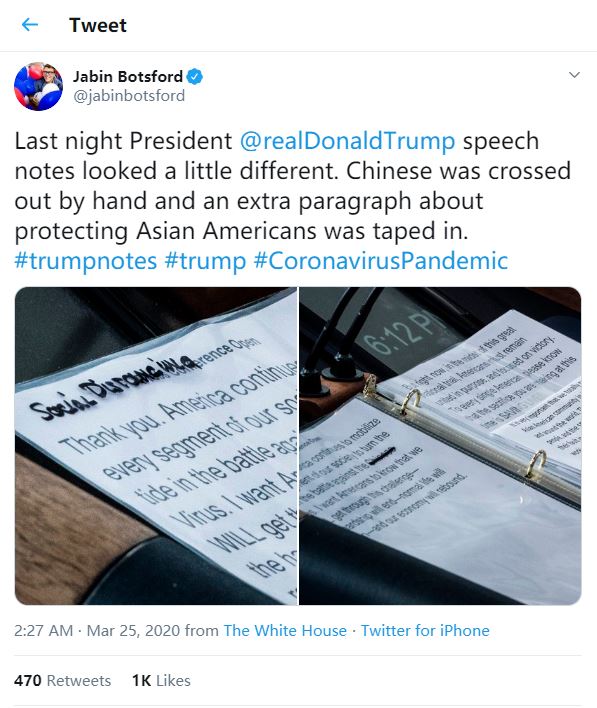 About Sunney 107 Articles
I am currently a Professor of Zhejiang Gongshang University, Hangzhou, China.